From the Editor-in-Chief’s desk: Your July 26 briefing

Tonight has been a challenge for a lot of us here as we try to put the paper to bed, especially given the recent turn of events around us. Obviously there are factors we have had to consider, and take into account.

In saying that, there obviously is keen interest to see how things unfold moving forward.

# The permanent secretary for Health and Medical Services Dr James Fong announced that Fiji’s 7-day rolling average of cases per million per day remains among the highest in the world. This means we have among the highest daily cases reported for our population size. Read more on www.fijitimes.com

## In her summary tonight, Head of Health Protection, Dr Aalisha Sahukhan announced 626 new cases of COVID-19 for the 24 hour period that ended at 8am today. Read more on www.fijitimes.com

### Here are some headlines in The Fiji Times’ edition for Monday, July 26.

Before that though, as they say, the show must go on. So we are focused on the Olympic Games stage.

THE stage is set for our foray into the Olympic Games 7s rugby competition.

There is great interest in this event for the one reason that we are defending champions.

We are the defending gold medallists after that breath-taking victory in 2016, in Rio de Janeiro, Brazil.

We went into the games as unknowns, and came off with so many positives, anchoring a very powerful percentage on the Google search engine.

We came off on top of the world, earning rave reviews, and capturing the imagination of the sporting world.

We were on top of the world. We were the masters of the game, attracting millions of eye-balls, and inspiring many fans to embrace the game.

We catapulted a little known island in the middle of the Pacific Ocean onto the highest pedestal in global sports history.

The global audience viewed the flair, flamboyance, and excitement of Fijian rugby 7s. They watched our game, many for the very first time.

Never before had it seen big men in white literally dance all over the field with a little oval shaped ball. They tackled with enthusiasm, were assertive, confident and were simply breath-taking, displaying feats of magic coupled with controlled aggression and power, making the abbreviated version of the sport look quite beautiful.

As we look ahead to the first match against Japan, we are reminded that we have received negative results as per our COVID-19 tests, for the past 20 weeks.

That’s a good sign, and a reflection of the massive contributions by the national coach Gareth Baber and our team.

There can be no doubts about the fact that 7s rugby is like a bridge that holds us together as a nation.

It cuts through every imaginary demarcation line, and unites Fijians.

Many people have made huge sacrifices for this foray into Olympic Games history. We acknowledge every team member, the coaching staff and support staff, and their loved ones back home. We look forward with great pride, and anticipation. As we count down the hours to the first game, we wish our team the very best.

In saying that, let us remind ourselves that hope can motivate a nation. We are in the middle of one of our greatest challenges right here at home. Let’s be motivated to fight this war against the pandemic! Go Fiji, go.

# SOME politicians were taken in for questioning by police at its Criminal Investigations Department in Toorak, Suva, last night. Acting Commissioner of Police Rusiate Tudravu confirmed this last night, but did not state the reasons.

# RESOURCES to contain the COVID-19 virus have stretched to breaking point, claims Unity Fiji Party leader Savenaca Narube. However, in response, permanent secretary for Health, Dr James Fong said they have expanded and refocused efforts to save as many lives as possible.

BUSINESSES in the Western Division have once again reiterated the need for a nationwide lockdown to focus on mass vaccination of the target population to achieve herd immunity quickly. Nadi Chamber of Commerce and Industry president Dr Ram Raju said Fiji’s healthcare system would not be able to cope with providing any meaningful medical care.

# THREE people have been arrested in relation to the burning of a shop and the compound of a mosque in Naqara on Taveuni yesterday.

LETTERS TO THE EDITOR

# There are many interesting letters on Pages 8 and 9. Get a feel of the pulse of the nation. Read about what people talking about. 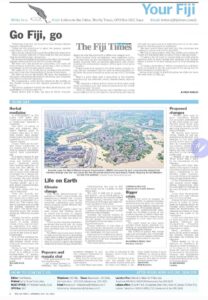 # In this every popular section of the newspaper, read about: WHEN health issues robbed him of completing high school, Abdul Zibran turned to using his knowledge about fixing vehicles to earn a living. The Maqbool Rd, in Nadera, Nasinu resident, said he now had a completely new outlook on life and a definition to the word “success”. 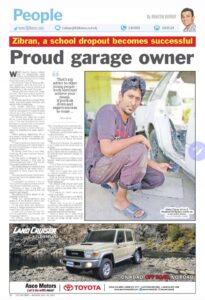 # Remember we also have this popular section every Monday. Read about: FIJI’S links to Samoa and Tonga are perhaps best displayed by influences in architecture and handicraft. These have withstood the test of time and proved that Pacific ancestors were great and gifted craftsmen. The Lemaki clan, who live on Lakeba, Kabara and other parts of Fiji, said they have links to the island of Manono in Samoa.

# FIJI’S top agriculture exports to New Zealand in 2020 were taro, kava, other vegetables, eggplants and cassava. This was highlighted during the webinar on Exporting to New Zealand by Carline Bentley who looks after the New Zealand market.

# THE Suva Retailers Association has welcomed the national budget and the effort by the government to stimulate economic activity and confidence with a commitment to those most affected; people and businesses. 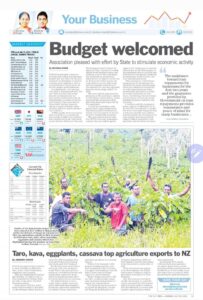 # The big one on the back page is on the Olympic Games in Tokyo, Japan. 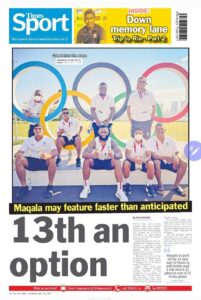 ### There’s a lot more to read about inside but you’ll have to get a copy to know what we are talking about. Happy reading!